It’s been about a year and half since I purchased Skyrim and even after logging almost 330 hours in game I still find myself drawn to it from time to time, and I’ve been meaning to write up an update about some of the mods I’m using and would recommend.(yay for finally getting around to it)

Quite possibly the most important thing you can do when modding Skyrim is to ensure that files are loaded in the proper order for stability and so things work they way they are intended.

B.O.S.S. is currently the best way to accomplish this.  It will automatically rearrange your load order and also warn you about possible problems with mods.

First I’ve edited my previous Skyrim post to weed out some of the mods I no longer recommend.  I’m also not going to relist and mods I’ve mentioned there to save some space.

I highly recommend getting all the Unofficial Patches for the base game and any DLC’s that you own.

Static Mesh Improvement Mod – SMIM  This mod edits many 3D models to improve their appearance and to fix many of the ugly seams and other oddities.

Skyrim Flora Overhaul  Adds more variety and increases the quality of trees, flowers, other plants in the game.  Currently I’m using the basic version of this mod since I have trouble (endless loading screen) when trying to leave Solstheim with the other versions.

Run For Your Lives and When Vampires Attack (for Dawnguard)  Makes NPC’s run into their house or the nearest inn during dragon/vampire attacks to prevent them from accidentally getting killed.

Calientes Vanilla Outfits for CBBE (WIP)  Replaces some of the vanilla female clothes and armors to better fit the CBBE models and supports the fantastic bodyslide that allows for nearly endless customization of the body shape.

I had been hearing so much about Skyrim and how awesome it was but I couldn’t afford to buy it when it came out November 11th.  So to satisfy my Elder Scrolls game cravings I installed TES3: Morrowind which I’ve owned since it came out in 2002 but I didn’t play it much back then because my computer wasn’t quite up to running it well, so I never got around to finishing the main story quest line. This time I was determined to get though the main quest, which I did after getting quite a ways though the game then deciding to create a new character and starting over.  I also did something else that I hadn’t done in Morrowind before which is to actually use some mods.  I won’t get into which ones since much of this post is going to be about the mods I’m now using for Skyrim.

Around the same time I also watched all of HBO’s Game of Thrones series which only served to further put me in the mood for Skyrim.

So finally Thursday December 29th I came home from work and decided that since I’ve got a four day weekend why not spend all of it playing a video game, so I went on Steam and bought Skyrim.  I then spent my whole weekend playing Skyrim like it was my job.  From Thursday evening to Monday night I got in about 52 hours playing this game.  One of the neat and at the same time depressing things about Steam is that it keeps track of how much time you play games you’ve purchased through it.

Anyways after playing this game a few weeks and trying out some mods I wanted to list the mods that I’m currently using and why.  Red comments added June 20th 2013

Glowing Ore Veins 300 this was probably the first mod that I added right after walking though the first mine that I found in game that I couldn’t see any of the ore veins.  Now that I don’t really do much mining I’ve decided to turn this one off since ore veins are actually everywhere out in the world and seeing glowing bits of ground while out wandering about can be distracting.
After using this mod for awhile I’ve gotten so I can recognise ore veins without it fairly easily now, so I no longer use it since it somewhat ruins immersion to have some glowing bit of ground way out in the distance.

Calientes Female Body Mod Big Bottom Edition -CBBE- gotta have naked ladies none of that ugly underwear when you take off someones clothes that the vanilla game has. I’m using the Slim version of this since the regular version the breasts are just a tad ridiculous, and since my character is a lady I prefer her with small boobs.  I am anxiously awaiting new armor/clothes meshes that fit these new body meshes.

No More Blocky Faces simple does what it says.
Not really needed anymore for anyone that is using Bethesda’s HD texture DLC or and of the many mods that change the face textures including CBBE.

SkyUI this one is a pretty big deal, especially the latest version that was made available last weekend.  It changes many of the menus (inventory, magic, container, and barter) to be much more mouse friendly than the consolized menus that the game comes with.

TESV Acceleration Layer this helps speed up the game in some CPU bound portions of the game which is a big help for me since my computer is about 3.5 years old now and this is really the first game that I’ve played that it struggles with.
Skyrim has gotten several official patches that have much improved performance to the point where it’s not as CPU bound as it was, and this isn’t as effective as it was.  That and I’ve upgraded to a high end video card so the game runs quite smoothly for me now.

A Quality World Map – With Roads or World Map – Skyrim Hold Borders this adds all the roads to the map and the second one which is based on the first adds the roads and borders of the various holds.

Dovahkiin Hideout this adds a nice big basement with lots of weapon racks, armor mannequins, storage, all the various crating tables and is connected to all of the houses that you can own in the game which serves as a nice way to quickly get from one house to the next.
This mod was made before the creation kit was available and hasn’t been updated since and is buggy as a result.
If you insist on still using it, go get a compatibility patch here.
Sharlikrans Compatibility Patches

JaySuS Swords adds quite a few high quality swords to the game.  I got this since I’m not really a fan of how many of the swords in game look.
This mod hasn’t been updated in awhile and also requires a compatibility patch.
Sharlikrans Compatibility Patches

So that’s it I’ve still got quite a lot to do in the game and it should keep me busy for at least a few more weeks.  Although I’ve already got all the gear I wanted since I focused on leveling my smithing and enchanting early in the game and I have a pretty sweet set of enchanted Daedric armor.  It’s rather rare that I run into anyone that can hurt me much if I’m wearing that, even with the difficulty on the hardest setting.

Here is a shot of my character in my fancy around town outfit. (I think the body mod was turned of for this) 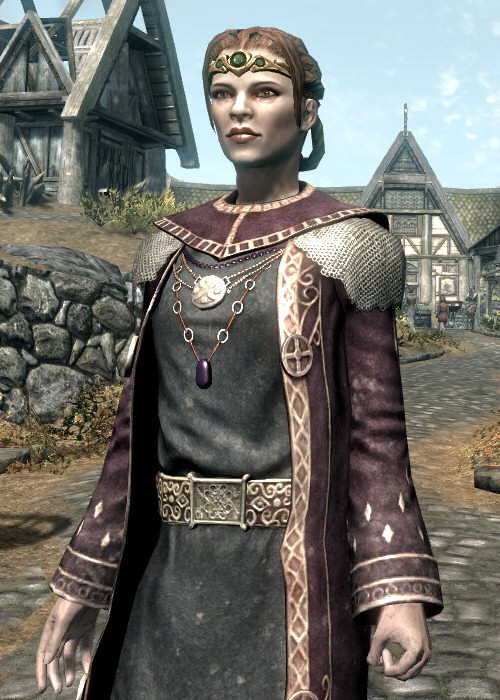